Four U.S. Senators said Sullivan & Cromwell was “simply not in a position to uncover the information needed to ensure confidence in any investigation or findings” regarding FTX.

A bipartisan group of four United States senators has criticized one of the law firms involved in the bankruptcy case of crypto exchange FTX for conflicts of interest.

In a Jan. 9 letter to Judge John Dorsey of the U.S. Bankruptcy Court for the District of Delaware, Senators John Hickenlooper, Thom Tillis, Elizabeth Warren and Cynthia Lummis called on the judge to approve a motion appointing an independent examiner into FTX’s activities prior to its collapse in November. The U.S. lawmakers said Sullivan & Cromwell, the law firm currently tasked with the investigation, had previously provided legal services to FTX and “one of its partners even served as FTX’s general counsel” — a perceived conflict of interest amid the firm’s bankruptcy proceedings.

“The damage FTX and other mismanaged digital asset firms have caused is considerable: they have destroyed the life savings of tens of thousands of customers in the U.S. and all over the world,” says the letter. “We believe it is critical that a strong, objective, and disinterested examiner is appointed in this case to conduct a searching investigation of FTX, FTX US and its related entities in order to uncover the facts needed to assure FTX’s customers – and the broader public – that justice is served and to inform Congress’ consideration of future digital asset legislation.”

“Given their longstanding legal work for FTX, [Sullivan & Cromwell] may well bear a measure of responsibility for the damage wrecked on the company’s victims. Put bluntly, the firm is simply not in a position to uncover the information needed to ensure confidence in any investigation or findings.”

In a statement to Cointelegraph, a Sullivan & Cromwell spokesperson said the firm “never served as primary outside counsel to any FTX entity” and had a “limited and largely transactional relationship with FTX and certain affiliates prior to the bankruptcy”. The spokesperson claimed the law firm met the definition of “disinterested” as required under the U.S. Bankruptcy Code.

Get this: FTX’s legal advisors *pre-collapse* want to be appointed to oversee investigations INTO the collapse.

I’m no legal expert, but that sounds like a conflict of interest. With @SenThomTillis @SenWarren @SenLummishttps://t.co/iz3k9yP1uT

FTX Group filed for Chapter 11 bankruptcy on Nov. 11, and former CEO Sam Bankman-Fried was charged with eight criminal counts in federal court in December. The next public hearing in FTX’s bankruptcy case is scheduled for Jan. 11, while Bankman-Fried’s trial is expected to start in October.

U.S. authorities have targeted assets previously controlled by FTX and its executives, with the Justice Department announcing on Jan. 9 it had seized more than 55 million shares of Robinhood and more than $20 million in U.S. currency as part of the case against Bankman-Fried. Bankman-Fried, BlockFi and FTX creditor Yonathan Ben Shimon had each made separate claims on the assets.

This article was updated on Jan. 11 to include a response from Sullivan & Cromwell. 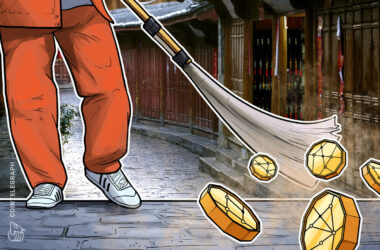 From mining to software: China’s regulatory crackdown on crypto continues

On August 29th, Binance revealed that it had received permission to operate as a Financial Service Provider with…