Lawmakers, regulators and even the institutional media don’t seem to have much interest in faulting SBF for using customer money to trade under the table.

Will former FTX CEO Sam Bankman-Fried be held accountable for his mismanagement of investor funds?

After most of the entities tied to his cryptocurrency exchange became insolvent last week, blockchain analysts concluded the insolvencies came as a partial result of the exchange’s trading house, Alameda Research, burning through nearly $10 billion in cash that technically belonged to FTX customers. To date, the company has declined to elaborate on the contractual details that made the arrangement possible — or legal.

In the aftermath of FTX’s collapse, skeptics have questioned whether the elite — in Washington or elsewhere — will be motivated to investigate the situation with any rigor. Tesla, SpaceX and Twitter CEO Elon Musk suggested in a Nov. 13 tweet that he was among those critics, sharing an image that ties Bankman-Fried — also known as “SBF” — to Securities and Exchange Commission Chair Gary Gensler. Bankman-Fried is a graduate of the Massachusetts Institute of Technology, the image notes, where Gensler served as a professor. And he’s been romantically linked to Alameda Research CEO Caroline Ellison, a Stanford graduate whose father, Glenn Ellison, also teaches at MIT.

There are also more serious reasons to wonder who might be interested in holding SBF accountable — like a glowing Nov. 14 interview with SBF published by New York Times writer David Yaffe-Bellany. Noting that SBF had been “compared to titans of finance like John Pierpont Morgan and Warren Buffett,” Yaffe-Bellany says that SBF “did, however, agree with critics in the crypto community who said he had expanded his business interests too quickly across a wide swath of the industry.”

OK, but what about the allegation that Alameda used more than half of FTX’s $16 billion in customer deposits to make failed trades? “He said the size of the position was in the billions of dollars but declined to provide further details,” the Times noted before moving on.

Related: The market isn’t surging anytime soon — So get used to dark times

What about new blockchain evidence that indicates Alameda used advanced knowledge of which assets FTX would list in order to inform its purchases? Such “front-running” is a form of insider trading — one that an attorney might argue is illegal. The Times failed to even broach the issue.

Disgraceful reporting by the @nytimes on FTX. It portrays SBF as a charitable entrepreneur who went under and does not mention the words fraud, criminal, substance abuse, friends & family Bahamas KYC racket, hack, stolen funds or wiped servers anywhere.https://t.co/rBJ7O0L4sV

Why is legacy media protecting SBF?

He bought them, with what may have been stolen customer funds. We don’t yet know full amounts, but millions flowed to:

Media infatuation isn’t the only advantage SBF enjoys. As some observers — not the New York Times, but others — have noted, he also holds a degree of political influence accrued from hours spent consorting on Capitol Hill, in addition to the tens of millions he has spent on contributions. His $5.2 million donation to President Joe Biden’s 2020 presidential campaign made him its second-largest CEO donor. He gave another $39.8 million to political action committees and candidates primarily affiliated with Democrats in 2022.

Related: Let’s move on from FTX’s collapse and get back to the basics

Of that figure, $27 million went to a group called Protect our Future. The group reported spending around $24 million directly on candidates’ races — including $250,000 in support of New Jersey’s newly elected Representative Robert Menendez Jr., whose father sits on the Senate Banking Committee and Senate Finance Committee. (As some may recall, a federal jury dropped corruption charges against Menendez Sr. in 2017 after failing to reach a verdict. A Menendez spokesperson said in October that he was facing a new federal probe over similar allegations.)

Perhaps it’s understandable that some observers are wondering whether SBF has faced the appropriate level of regulatory scrutiny — or whether he will in the future. “I want to know how many whistleblower complaints were filed with the SEC tipping them off to FTX’s fraud,” the Blockchain Association’s policy chief, Jake Chervinsky, wrote in a Nov. 15 tweet, before referencing a March 23 meeting between Gensler and SBF. “I want to know how many were filed before FTX met with Chair Gensler’s office to talk about a sweetheart deal. I want to know why our ‘cop on the beat’ was blind to this.”

I want to know how many whistleblower complaints were filed with the SEC tipping them off to FTX’s fraud.

I want to know how many were filed before FTX met with Chair Gensler’s office to talk about a sweetheart deal.

I want to know why our “cop on the beat” was blind to this.

Helius Labs co-founder Mert Mumtaz made a similar comment in a tweet a day earlier. For context, it came in response to an exchange between Democratic Representative Alexandria Ocasio-Cortez and Barron reporter Tae Kim, who alluded to SBF’s rank in a game called League of Legends. “Apparently, SBF is worse at playing video games than AOC,” Kim tweeted, to which Ocasio-Cortez replied, “VCs [venture capital firms] were impressed by Bronze III??”

Mumtaz opined with a reference to Alexey Pertsev, the developer jailed this year for writing the code that enabled the crypto-anonymizing service Tornado Cash. “US politicians when someone writes open-source crypto protocol: straight to jail,” Mumtaz wrote. “US politicians when someone literally defrauds people out of billions while running a drugged out polycule: ‘haha he is bad at league.’”

US politicians when someone writes open-source crypto protocol: straight to jail

US politicians when someone literally defrauds people out of billions while running a drugged out polycule: “haha he is bad at league” pic.twitter.com/h0PX0JLbSj

Of course, there are things that regulators and elected officials could do to prove the skeptics wrong. For example, legislators to whom SBF has a connection — such as the Menendez clan — could recuse themselves from participating in the inevitable congressional hearings related to FTX’s crash.

Secondly, Gensler and other regulators could aggressively —and publicly — investigate the ties between FTX US and FTX’s international operations. They could refrain from disingenuously seizing the moment to target completely unrelated projects in decentralized finance (DeFi) — which are merely bits of code created and sometimes maintained by developers, such as Tornado Cash. The dishonesty inherent to using platforms that fail as an excuse to target their competitors has already led to claims that SBF was a “fed” who intentionally tarnished cryptocurrency. While those claims have mostly been light-hearted to date, it seems nearly certain that they will snowball into real conspiracy theories.

You will be remembered as the biggest fraud in financial history for generations. https://t.co/swFUUjXSVl

i am not conspiratorially minded, but the fact that SBF is still on the loose and shit posting on twitter,

and we see softball media coverage of the event, and Kevin O’Leary saying he might work with him again

Finally, lawmakers who do take aim at matters related to cryptocurrency and finance could focus on coming up with rules that prevent industry kingpins from using and abusing their customers. That would represent a welcome pivot from the approach taken by congressional Democrats, who have been much more focused on coming up with rules that target the most broke Americans. Take, for example, the Biden administration’s failed proposal to force banks to report data on bank accounts with more than $600 in annual transactions.

We’ll find out soon whether America’s ruling class decides to embrace any of these measures by ejecting SBF from the industry and cracking down on any copycats. But if past is prologue, don’t get your hopes up.

Rudy Takala is the opinion editor at Cointelegraph. He formerly worked as an editor or reporter in newsrooms that include Fox News, The Hill and the Washington Examiner. He holds a master’s degree in political communication from American University in Washington, DC.

The opinions expressed are the author’s alone and do not necessarily reflect the views of Cointelegraph. This article is for general information purposes and is not intended to be and should not be taken as legal or investment advice. 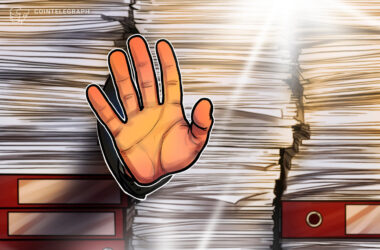